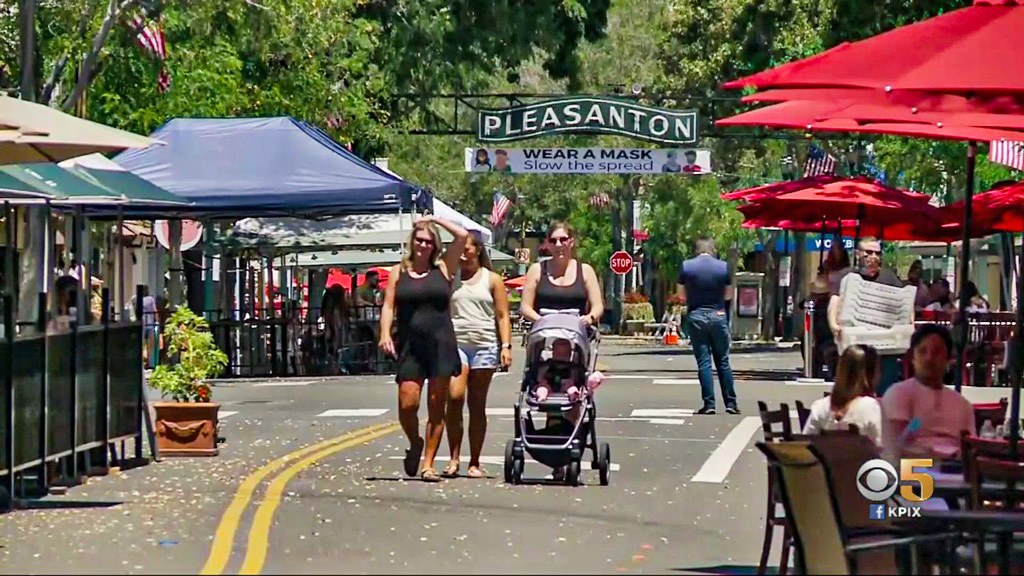 LIVERMORE (CBS SF) — Four cities in Alameda County pushed back on Saturday after the Alameda County Health Department suspended outdoor dining due to stricter state guidance.
In late June, the county had freed up restaurants, bars and wineries to provide outdoor dining but it shifted gears Friday night in a press release, saying that only takeout and delivery would be allowed until a variance could be obtained from the state.
On Saturday, Livermore and Hayward announced they wouldn’t enforce the revised order and would proceed with planned street closures this weekend that allow more space for outdoor dining in their cities.
Oakland city officials said street closures would not take place but added that the revised order wouldn’t be enforced.
“This is really going insane,” said Esteban Blancas, general manager of Nonni’s Bistro in Pleasanton. “There’s no way that we can just, like, shut down and throw away food money!”
Blancas said they already bought thousands of dollars worth of food for the weekend and the state shouldn’t just tell them to shut down with no advance warning.
Dublin’s Facebook page carried a message saying the city “will not be conducting any local enforcement this weekend and will assess the discrepancy and seek clarity early next week.
Livermore’s Facebook announcement said that “while the press release has new information, neither the county nor the State of California has issued new legal Orders,” Livermore posted on its Facebook page Saturday.
“Therefore, city of Livermore will not be adjusting enforcement this weekend and First Street will remain closed to cars.”
Hayward followed suit, with plans continuing for a street closure event “and will support local restaurants who choose to participate — whether by providing outdoor dining service or just takeout service.”
In Oakland, the city released a tersely-worded statement saying the city wouldn’t enforce the revised guidance but added, “the state may enforce the ban on outdoor dining in Alameda County, including issuing citations. We share this information so business owners may make informed decisions on their daily operations.”
The city was in contact with the state and county to resolve the issue, according to the statement, which came from city administrator Ed Reiskin.
“This latest information from the county is confusing and contradicts the previous Alameda County Health Officer Order allowing outdoor dining, and we share your frustration,” according to the statement.
Oakland’s Flex Streets for restaurant operations would be temporarily put on hold until more clarification is received from the county and state, which could come a few days after the Board of Supervisors’ meeting on Tuesday, city officials said.
A spokesperson with the Alameda County Health Department said Saturday afternoon that “We understand the confusion and frustration, and appreciate the ongoing support of our cities and businesses as we work to resolve an evolving issue.”
New guidance issued Friday from the state forced counties that have not received a variance from the state to ban activities like outdoor dining, the county said in a press release Friday night.
On Tuesday, the county’s board of supervisors will consider a letter of support for a variance from the state that would give the county flexibility to allow activities that health officials determine to be lower risk.
As of Saturday afternoon, Alameda County had 7,725 positive cases of COVID-19, the highest number of cases of any county in the Bay Area.
© Copyright 2020 CBS Broadcasting Inc. All Rights Reserved. This material may not be published, broadcast, rewritten, or redistributed. KPIX 5’s Da Lin and Bay City News contributed to this report