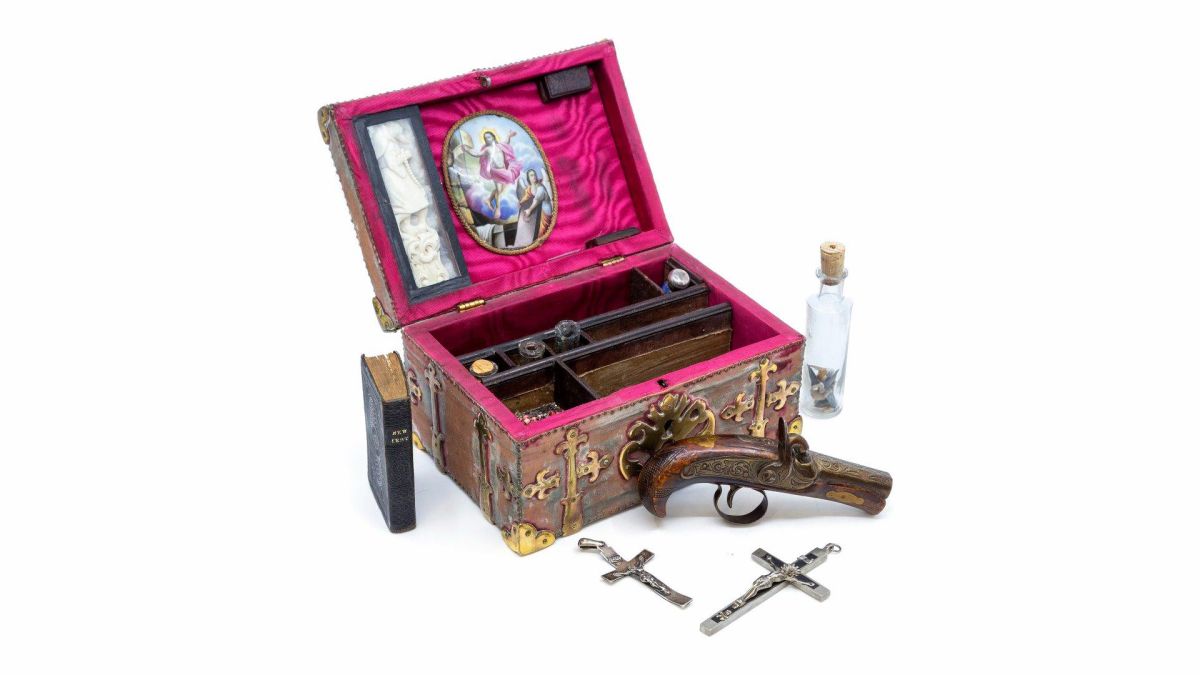 An antique, brass-trimmed wooden box holds all the tools that you might require in order to slay a vampire
, including a 19th-century bible, crucifixes and a pistol.
This “vampire-slaying kit” is estimated to be worth about $2,500 to $3,700 (£2,000 to £3,000) according to Hansons Auctioneers
in Derbyshire, England, which is taking bids on the box beginning July 21.
Lined with crimson silk, the inside of the lid is decorated with an oval enamel painting showing Christ’s resurrection. Next to that painting is an ivory carving of a wolf wearing a hooded robe and carrying rosary beads (though it is uncertain if the contents of the box are also suitable for dispatching werewolves
, as the auction listing only mentions vampires).
Related: 7 strange ways humans act like vampires
Inside the box are eight compartments holding: a copy of the New Testament published in 1842; a knife with a silver blade; a percussion cap pocket pistol; pliers, crucifixes and rosary beads; a vial with a metal lid — “contents unknown;” and a small bottle containing sharks’ teeth, according to the listing.
Vampire folklore and the belief in vampires can be traced to the ancient world. Indeed, burials dating to more than 1,000 years ago in Europe took safeguards to protect the living against the restless undead, with suspected vampires buried with stones in their mouths
or pinned in place with rocks or iron bars
.
Religious items such as crucifixes and bibles were thought to repel vampires. (Image credit: Hansons Auctioneers)
For people who believed in creatures that rose from the grave to drink blood, “the task of killing a vampire was extremely serious and historical accounts suggested the need for particular methods and tools,” Charles Hanson, owner of Hansons Auctioneers, said in a statement
.
However, alleged “vampires” were usually identified as such because people did not understand how infectious diseases spread, or because they misinterpreted a corpse’s appearance during natural decomposition, Live Science previously reported
.
As for the age and origins of this vampire-slaying kit — not to mention any indication that it was ever used to hunt and kill vampires — its current owner purchased it three years ago at an antiques fair in Newark-on-Trent in Nottinghamshire, England, and knows “very little of its history,” the owner told the auction house.
“I loved the look of the Gothic box and, when I opened it, I just had to have it,” said the owner, who lives in West Midlands in the U.K. and declined to be named. “I thought it was so interesting — a great conversation piece.”
The kit is part of an online auction
of antiques and collectibles offered by Hansons Auctioneers, beginning on July 16. Other items include: 19th-century silver tableware, trays and cups; compacts and snuff boxes; and jewelry such as brooches, lockets and rings — though only the vampire box is described as an object of “supernatural interest,” according to the auction website.
Originally published on Live Science.