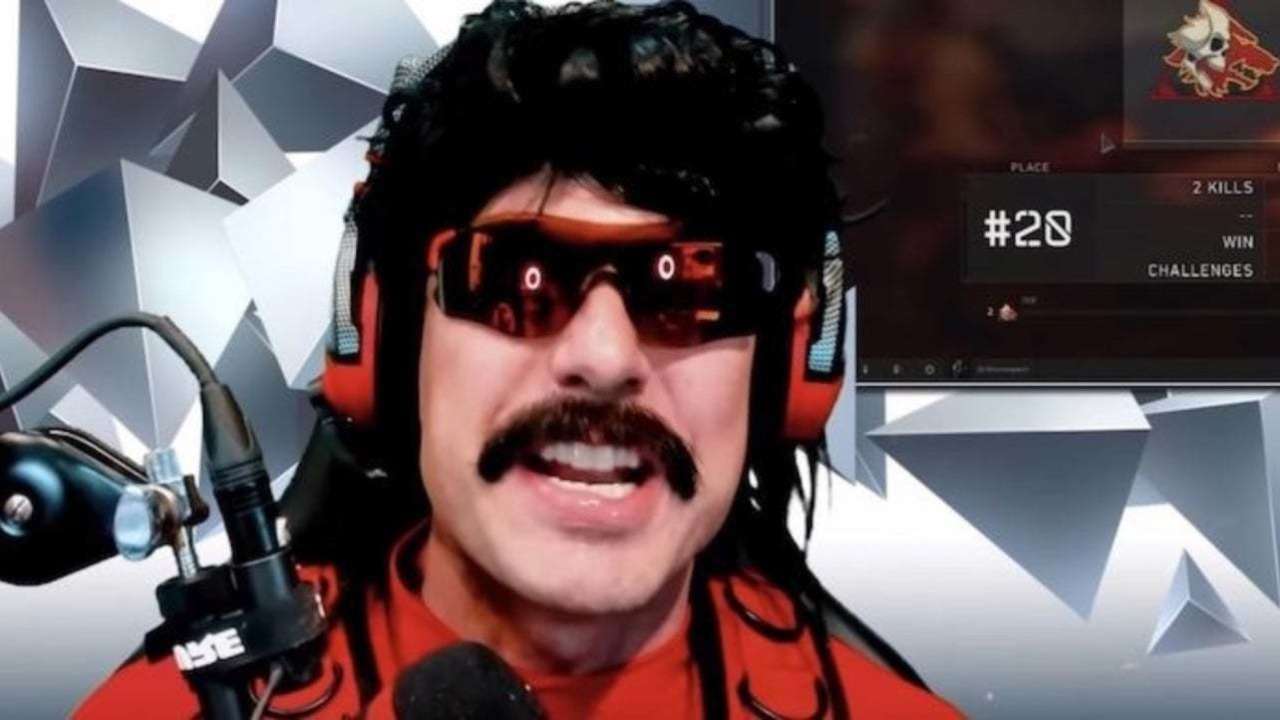 High-profile Twitch streamer Herschel “Guy” Beahm IV (better known as Dr Disrespect) has been banned from the livestreaming platform yet again. And this time, it seems to be permanent, rather than a temporary matter involving a DMCA. Beahm himself said he is unsure of why he was banned. However, others on Twitter claim the reason could be very serious, and not because of a copyright claim, as some originally speculated. We still don’t know why Beahm was hit with a ban. His punishment is one of the highest-profile bans in Twitch history. After more than a week, we still have no idea why the ban occurred. It remains unclear if Twitch is planning to address the reason in the future.
Why Was Dr Disrespect Banned From Twitch?
It’s unclear exactly why or how long Dr Disrespect will be banned. Following news of the ban Dr Disrespect did not say anything publicly about the situation, and searching for his Twitch account yielded no results. However, on June 27, a day after news of the ban broke, Beahm broke his silence and posted an update on Twitter, addressing his fans. According to the streamer, Twitch has not provided him with any specific reason for the ban. Meanwhile, Monday’s temporary suspension of Donald Trump was accompanied by specific reasoning, with Twitch even citing specific violations of its “hateful conduct” policy.
Dr Disrespect’s Statement On His Ban
Champions Club,Twitch has not notified me on the specific reason behind their decision… Firm handshakes to all for the support during this difficult time.-Dr Disrespect
Dr Disrespect (@drdisrespect) June 28, 2020
Regarding Dr Disrespect’s ban, Twitch has offered no specific explanation for the move publicly. Of course, this has left room for speculation. Some have suggested that it could be the result of a DMCA takedown (of which there has been a flurry recent). However, this would ordinarily result in a temporary ban.
Twitch’s Statement On Dr Disrespect’s Ban
When we reached out to Twitch for comment, we were given the same generic statement already offered to the wider community: “As is our process, we take appropriate action when we have evidence that a streamer has acted in violation of our Community Guidelines or Terms of Service. These apply to all streamers regardless of status or prominence in the community.”
The Twitch Community Reacts To Dr Disrespect’s Ban
Dr Disrespect was banned from the livestreaming platform back in June 2019 for broadcasting from a public restroom at E3. The ban only lasted two weeks and saw a divisive response from the Twitch community.
According to esports reporter Rod Breslau, Dr Disrepsect’s ban is not related to a DMCA measure, and is in fact a permanent ban, rather than a temporary one. This was the first indication there could be something more serious going on than a simple copyright issue. Twitch is also giving refunds to those who had subscribed to his channel and his emotes are no longer on the site.
Sources: DrDisrespect has been permanently banned from Twitch
Rod “4475 SR & Immortal peak” Breslau (@Slasher) June 26, 2020
Sources: it is not DMCA
Rod “4475 SR & Immortal peak” Breslau (@Slasher) June 26, 2020
Breslau also shared a video from Beahm’s final stream that showed him struggling to speak, possibly because he knew what was about to happen.
watching a video of the last 8 minutes of todays DrDisrespects stream, he changes behavior abruptly and mumbles out an extremely odd ending”We’ll…we’ll get through this champions. life’s weird right now….we’ll get through this okay. and uh…..fuck” pic.twitter.com/sXXHRbtVij
Rod “4475 SR & Immortal peak” Breslau (@Slasher) June 27, 2020
Zach Bussey, who reports on Twitch happenings, indicated there won’t be a public statement shared by Twitch regarding the ban, but that he too has heard it is permanent.
I’ve just been informed that there will be NO public statement made by Twitch – but the corporate communication team is responding to press inquiries.This is a big one folks. I think Doc is gone. #TwitchNews
Zach Bussey (@zachbussey) June 26, 2020
Official Twitch Statement: “As is our process, we take appropriate action when we have evidence that a streamer has acted in violation of our Community Guidelines or Terms of Service. These apply to all streamers regardless of status or prominence in the community.”
Zach Bussey (@zachbussey) June 26, 2020
Another streamer, Shannon Plante (AKA ShannonZKiller), indicated that she’s heard the Dr Disrepect ban is a permanent one, adding that the cause is “serious.” She offered no further specifics, saying she knows the reason for the ban but that she “cannot say” more. She does state that he is “done, and not just on Twitch.” At the time of this writing, his YouTube channel and Twitter account remain online, but Plante deleted her tweet.
From my own sources: Doc is indeed done, and not just on Twitch. I know why and cannot say. But this is serious.
Shannon (@ShannonZKiller) June 26, 2020
Dr Disrespect’s ban comes not long after Twitch removed several other prominent streamers for alleged sexual abuse and harassment, including IamSp00n, BlessRNG, DreadedCone, and others. Earlier this week, Twitch said it would be issuing permanent suspensions following its investigation into these allegations. The accusations led to a Twitch blackout, with streamers staying off the platform for a day to encourage the streaming service to take action against abusers.
Giphy Removes Dr Disrespect GIFs
Popular GIF hosting service Giphy has also apparently removed GIF material featuring Beahm from its site. This is despite the reasoning behind the ban still not being made public.
In related news, two Ubisoft executives were suspended as the company continues its internal investigation into recent misconduct allegations. A day prior, Ubisoft released a statement about these allegations and its response to them, stating its commitment to “taking any and all appropriate disciplinary action” if necessary.