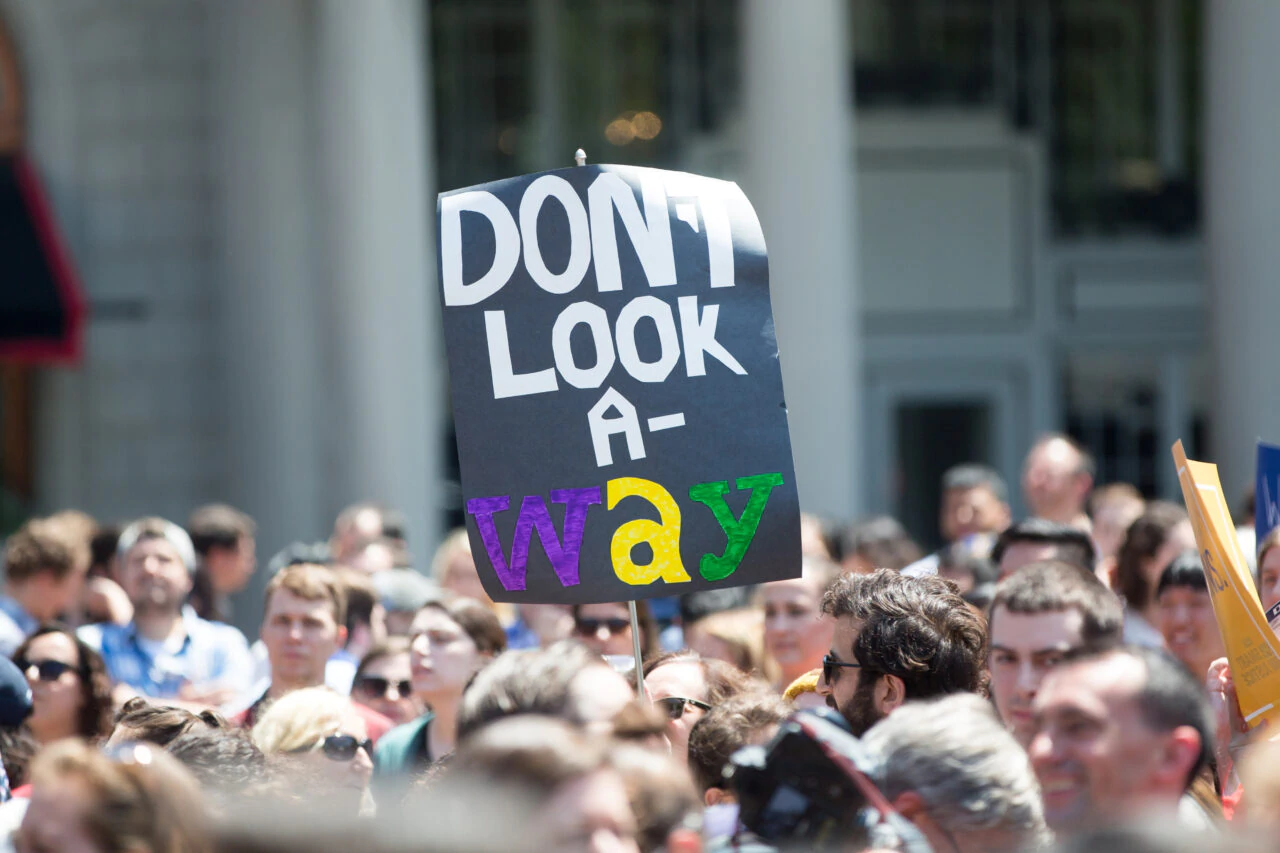 The conspiracy is being compared to Pizzagate, a theory that linked Hilary Clintons 2016 campaign to a pizzeria accused of human trafficking.
A participant of the Wayfair walkout holds a sign tha reads “Dont Look Away” in Copley Square on June 26, 2019 in Boston, Massachusetts. Wayfair sold more than $200,000 in bedroom furniture to a Texas detention facility for migrant children. (Photo by Scott Eisen/Getty Images)
Wayfair, the American online furniture retailer, is being accused of child trafficking and money laundering.
A post on a subreddit called r/conspiracy showed products like cabinets and pillows with the names of missing children, being sold for thousands of dollars – seemingly much more than they are worth.
READ MORE:Times Up: Child care providers are not Americas mammy
One Reddit user theorized that the missing childrens names matched the product names of several Wayfair storage cabinets, and that people were paying for the children through the website, theCourier Daily reported.
Samiyah Mumun, Samara Duplessis, Yaritza Castro, Cameron James Dziedzic, Mary Durett, and Kylah Coleman are the names of missing children, and the first names are used by the site.
The cabinets named Neriah, Yaritza, Samiyah, and Alyvia, were being prices at about $13,000 each, Gizmondo reported.
The conspiracy is being compared to #Pizzagate, a debunked right-wing conspiracy that linked Hilary Clintons 2016 campaign to a pizzeria that was accused of human trafficking. children in the basement.
Wayfair needs to be investigated. If you want to stop this devil worshiping cult Write my Name in come Nov! If you can pls donate. I will protect our children! pic.twitter.com/x2r8DYI34I
— Antoine Tucker (@montaga) July 11, 2020
Yall this Wayfair Human trafficking thing is crazy. Look at this, there are two pillows/shower curtains that are the exact same, but one is $100 and the other is $10K. The $10K one is named the same thing as a Black girl missing in Michigan… pic.twitter.com/1fFmrIBgxJ
— all black lives matter (@zarimx) July 10, 2020
The rumors on missing children being trafficked at Wayfairs warehouses are already being debunked as many names flowing around the controversy are children that have already been found.
Mumin was missing last month, but she was found in her hometown, the Courier Daily reported.
Duplessis, a 13-year-old girl from Michigan, is another missing person who was safely recovered.
Dziedzic was found by the police, in April 2, 2020 in Calvert County.
Durett, 16, went missing in the Hermann Park on December 14, 2017, but she was found one week later.
READ MORE:Chris Rock facing possible child trafficking charges over South African girl
In an email to Newsweek, a Wayfair spokeswoman has denied the accusations, saying, There is, of course, no truth to these claims.
The products in question are industrial grade cabinets that are accurately priced. Recognizing that the photos and descriptions provided by the supplier did not adequately explain the high price point, the spokeswoman said. We have temporarily removed the products from the site to rename them and to provide a more in-depth description and photos that accurately depict the product to clarify the price point.
Have you subscribed to theGrios new podcast Dear Culture? Download our newest episodes now!